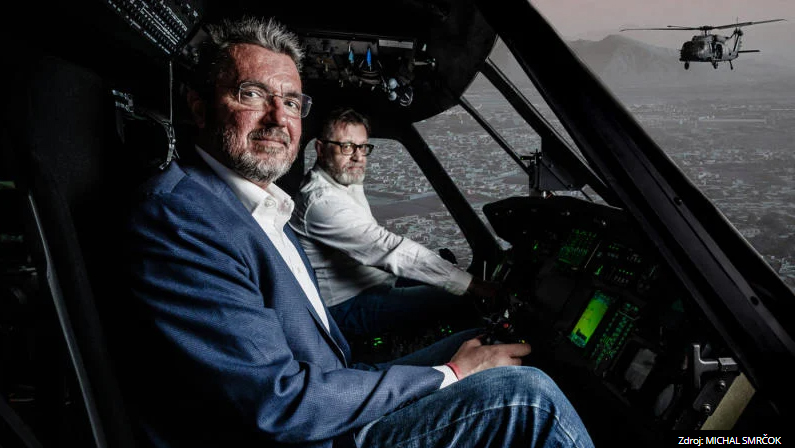 Flight simulators from Trenčín are conquering the world, they are among the best.

What kind of pilot would there be without thorough training?  The pilot is responsible for hundreds of human lives and any mistake could endanger the entire crew of the aircraft.

This is exactly what the Slovaks in Trenčín were aware of when they founded the company Virtual Reality Media (VRM a.s.) in 1992. VRM mainly deals with the design, development, and production of state-of-the-art flight simulators and training systems. The company was founded in 1992 as an integrator of computer hardware and software.

VRM is headed by Július Berith and Pavol Grman. Upon joining the company, we are greeted by a huge image of both founders, who have known each other since high school. They already knew at that time that they wanted to do business and their plan crystallized a few years later. Both come from the IT environment as they sold software and applications as young people.

Today, the company sells flight simulators to military and civil aviation and is among the world’s best. Their simulators are used all over the world.

At first it was a small company that started a business with software and computer technology after the revolution. This business began to grow in Slovakia in large numbers and there was a shortage of sellers.

„It simply came to our notice then. There was a lot of competition and we were looking for something we could do more efficiently. It drew us to graphics applications and their systems. In professional magazines, we were interested in the first applications of virtual reality, which came from the USA, „says Július Berith about the beginnings. However, according to him, several people were knocking on their foreheads at that time, when they came up with the idea that they would sell similar applications in Slovakia.

Meanwhile, their company used the American company Silicon Graphics, which sold graphic stations and managed development long ago. Both founders decided to sell these products at home in Slovakia.

In 1993, a completely new business plan was created, which was no longer focused only on the purchase and sale of graphics stations. „We started to deal with our own development of virtual reality. It was a strange idea at the time. We had big plans and good ideas, but there was less money, „explains J. Berith.

From hardware to simulators.

Cooperation with the American company Silicon Graphics intensified when it opened its branch in Brno. VRM presented its products, i.e. graphic stations, in 1994 at a military exhibition in Trenčín. „Among other visitors, the commander of the air force came to the exhibition, who was very excited about these products. “He needed a device called a simulator, because the technology at the time was obsolete“, Pavol Grman recalls at the beginning.

At the exhibition, the commander of the Air Force became acquainted with the technique that allowed the production of a simulator not only by simulating the cabin of the aircraft, but also by simulating other elements of combat deployment or other situations that are common in reality. When the founders of VRM were asked by military officials if they could make flight simulators using state-of-the-art technology, their answer was a confident yes.

„The technical basis for the development of the simulators was given to us by one of our collaborators, who was an aircraft pilot and knew more about similar devices,“ says J. Berith. The prepared technical documents culminated in 1995, when VRM won the first contract worth approximately 80 million crowns to produce a flight simulator for a MiG-29 fighter.

After the revolution in 1989, hundreds of professionals lost their jobs in state military companies as a result of controlled conversion. „We offered these clever people a job and a lot of experts came to us. Thanks to that, we were able to find our way around the market quickly. A year later, our simulator received prestigious awards, „says J. Berith.

Initially they financed the company from short-term loans, until they gradually got to the first orders and could afford to invest more and more funds in development.

After the opening of the borders, foreign competitors began to penetrate Slovakia. At VRM, they realized that if they wanted to keep up with the times, they had to constantly improve their solutions and invest in the skill of their employees. It also paid off to think about foreign expansion.

One of VRM’s biggest competitive advantages was that it was the first company in the Eastern bloc to start selling technology that used Western solutions. „No one else has produced simulators like ours in our region. It was a huge advantage that impressed customers, „says P. Grman.

Initially, they relied on a competitive price advantage, as Western solutions and their application in the Eastern bloc were much more expensive. Customers were given the idea of complete training based on simulators that can even be connected and simulate training in combat or other situations. According to the company’s founders, clients realized that they could move their skills to a higher level based on simulators from Trenčín.

Gradually, they reached markets throughout Europe, in Russia, the Middle East, North Africa and the United States. These are the strongest markets for VRM so far. The competition in the Eastern bloc did not appear until after the year 2000. „We still had an advantage. Since 1995, we have had other problems than the competition. Today we are on all continents and we continue to develop, „explains P. Grman.

In 2004, VRM also decided to go the civil aviation route and supply simulators to this sector. According to J. Berith, the company saw a hole in the market in the segment of small commercial aircraft, so-called “business jets”. They produced about five simulators for this group of aircraft.

A plan for the Boeing 737-800 is on the table today. This project is key for the company because the delivery includes an application for recognizing the cabin for solving technical problems or for basic procedural training through the augmented reality environment. After the development is completed, it will be deployed on other VRM projects as well.

The future pilot or service technician will sit in the cockpit with AR goggles, which will display the devices he controls in the area in front of the pilot, including a description of the correct procedures. The Slovaks have a large project for training in the field of civil aviation currently underway in China, but the coronavirus has slowed down further negotiations a bit.

Through an American partner, VRM managed to sell approximately fourteen pieces of simulators. As J. Berith further explains, what they lost in this partnership could be gained if they established their own branch in the USA.

That’s what happened, and last year they opened a branch in Orlando, USA, where they work with a local university. They managed to sign the first contract this August.

A similar scenario has occurred in the past in the Czech Republic, Hungary and Switzerland. They later sold the Czech and Hungarian companies.

The production of stand-alone simulators takes place in Trenčín.  So far, they have sold several dozen and their production can take anywhere from six months to two years. The price is at the level of millions of euros and it all depends on the specific product specification.

Pavol Grman says that the company still has several goals that it wants to achieve. At VRM, they have planned new markets that they would like to enter and increase the supply of simulators. At the same time, the company wants to work to be able to deliver products to the world more efficiently.

The investment should be in the order of millions of euros. From the obtained funds, it plans to finance the expansion into the market in the USA, China, the development of a new product and the basic stabilization of the company’s cash flow.

„We are currently in negotiations with a strategic partner in the USA who wants to buy two simulators from us. Negotiations with customers around the world, especially with China, have been delayed due to the coronavirus, „J. Berith clarifies the situation. According to him, the Chinese project is so large that capital financing was needed, otherwise they would not be able to implement it.

The goal of venture capital is to increase the value of the company and later merge with a large strategic partner. At stake is the creation of a larger company on a global level. „We expect it to grow and reach the level of our biggest competitors,“ says J. Berith.

According to its founders, the current value of the company is up to 30 million euros. „We want to try to build the structures of a large company. Presently, they still classify us as a small to medium-sized company,” explains J. Berith. The coronavirus also affected VRM activities.

Trade with the state.

In addition to the aforementioned delay in negotiations in China, the supply of simulators already manufactured was slightly extended, as it was not possible to travel around the world. The company also had to lay off, but as P. Grman says, these were not fundamental changes. „We haven’t fired ten percent of the people,“ he says.

VRM achieved sales of 8.6 million euros last year and its net profit was 119,000 euros. The company also does business with the state and admits that it is sometimes very difficult: „When someone is successful, people often think that bribes are to blame, and they look at you with narrowed eyes. After each change of government, it took about two years before we gained its trust,” says J. Berith.