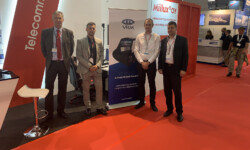 From the first day of the jubilee MSPO in Kielce, Poland, the exhibition of military equipment and modern technology was accompanied by numerous dynamic shows that attracted a large group of people and generated an avid interest.
Virtual Reality Media (VRM) had the honor to be a part of this extraordinary exhibition. During the exhibition VRM had been presenting the latest VR technology and its use for flight simulation as well as pilot training. We are very pleased that also the general public was interested in our exhibit, and generally people left with very pleasant feelings and a good mood.